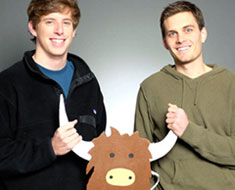 Furman alumni Tyler Droll and Brooks Buffington are celebrating a birthday, the first for their online business that has attracted big investments. Their anonymous messaging app, Yik Yak, which connects users who are geographically close to each other, has become a sensation on college campuses. It has also become a big hit with investors. The former Kappa Alpha fraternity brothers, who started the company after graduating in 2013, raised $1.5 million this spring and another $10 million shortly after that. Yik Yak, which has become the third-most downloaded app on the Google Play store, now has 22 employees. Read more in GSA Business.