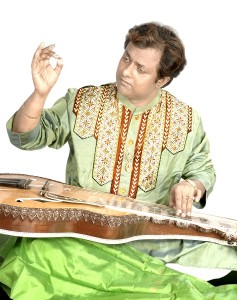 Presented by the Furman Music Department, the concert is free and open to the public. It is part of Furman’s Cultural Life Program.

Debashish Bhattacharya started learning Indian music from his parents before he learned the alphabet, giving his first guitar recital at the age of four on All India Radio. In childhood he mastered many Indian classical instrumental styles as well as vocal music from different teachers in Calcutta. He became a disciple and student of Brij Bhushan Khabra, the father of Indian classical guitar.

A 2009 Grammy Nominee, Bhattacharya has been featured in Billboard Top 10, Song Line Magazine Top 10, Central Asia and Asia Pacific World Music Top 10, and Amazon Top 100 Albums among others. He received the 2007 BBC Planet Award, 2005 Asiatic Society Gold Medal, and in 1984, the President of India Gold Medal.

Bhattacharya has performed more than 3000 concerts worldwide and trained over 1000 students. He has designed 19 guitars, and of his 15 albums, three have received international awards. He has played with Ustad Zakir Hussain, John McLaughlin, Jerry Douglas, Derek Trucks and other highly acclaimed musicians, including legendary Pandit Ravi Shankar.