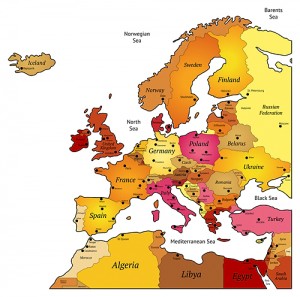 “It looks a whole lot like 1926 and 1936,” says political science professor Brent Nelson, Ph.D. Yet it also paints an accurate portrait of the region today.

The professor and author of several books about the European Union spoke to crowd of about 125 at the High Noon Lecture Series Wednesday.   His lecture, titled “Europe: The Troubled Continent”, was given at the Upcountry History Museum.

Dr. Nelsen said many European countries are breaking loose from three traditional European ideals, “integration over nationalism, domestic consensus over conflict, and welfare-state of internalism over liberal individualism.” These shifts, he said, have created friction.

Dr. Nelsen evidenced the crisis in the Ukraine, explaining how Russian President Vladimir Putin has returned to the use of power politics after he sensed weakness in Western Europe and its allies, including the United State.  Over the past year, Russia has moved to take over Crimea and now has control of Eastern Ukraine’s borders.

When referring to U.S. involvement in the crisis, Dr. Nelsen quoted president Barrack Obama, “We are not going to take this back by force, but we are going to impose sanctions, that in the long run, will work in our favor.”

So how exactly will this affect the U.S.? According to Dr. Nelsen it should not. However, the sanctions will cause surrounding countries to suffer due to their dependency on Russian resources. Nonetheless, Dr. Nelsen said history has proven the West can be patient, and he is confident that Russia will not last long by means of their current economy.

On the political front, Nelson said many countries are witnessing a dangerous shift as far right parties take root.  Fueling this growth, he said, is a growing distrust in the governments and their traditional political parties.