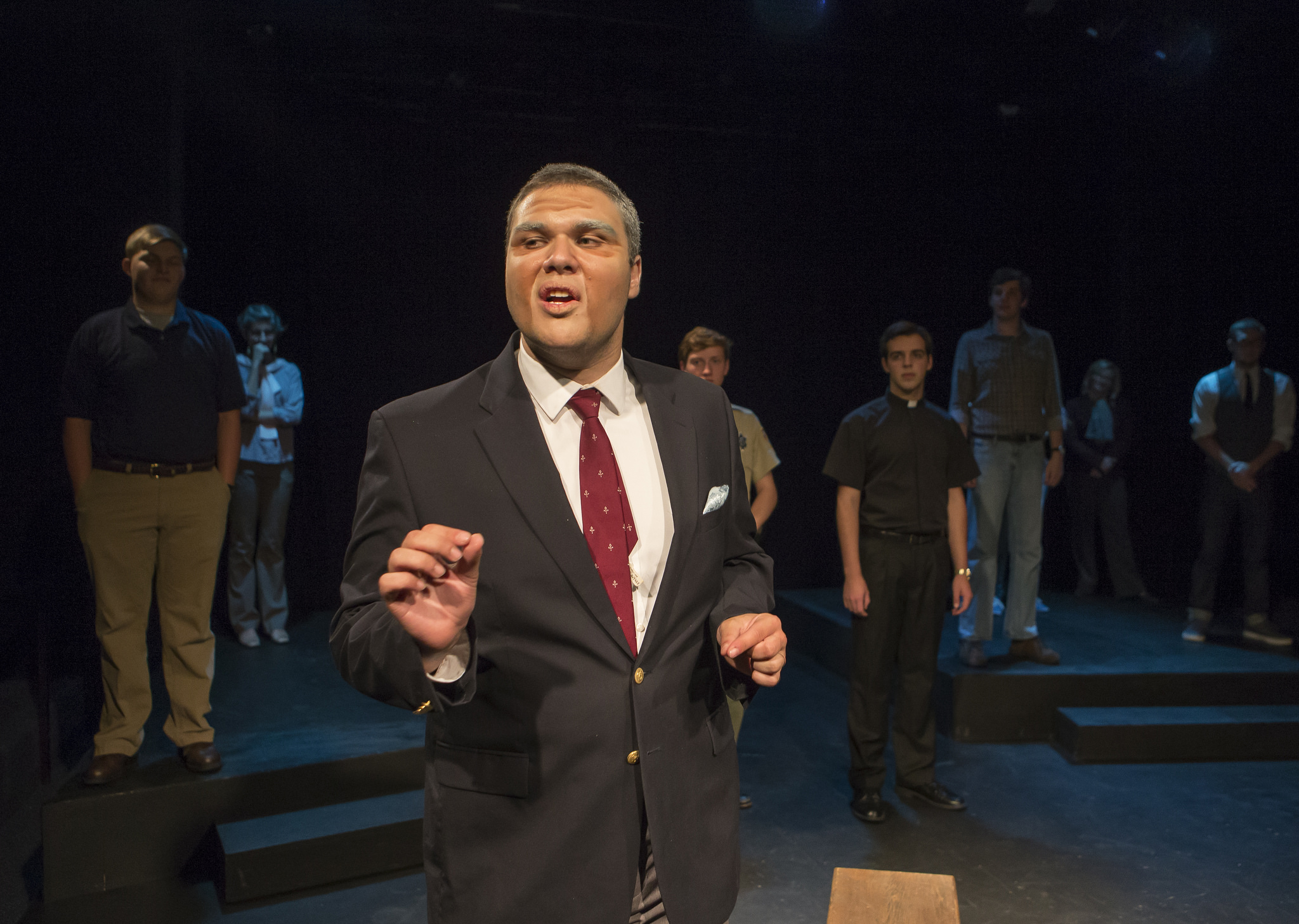 In just three-and-a-half weeks, the Furman University Theatre Arts Department has put together a complex whodunit murder mystery that, not only entertains, but takes on some of today’s most controversial issues of relationships, religion, and politics.

With several junior and senior theatre arts majors studying abroad in the United Kingdom this semester, many of Furman’s freshmen and sophomores have quickly stepped up to master the multi-faceted characters of Lanford Wilson’s contemporary play, Book of Days. The show will be presented at 8 p.m. Sept. 24-27 and Oct. 1-4 with a Sunday matinee performance at 3 p.m. Sept. 28 in the Theatre Playhouse on campus.

The play, designed for mature audiences, tells the story of small town Dublin, Mo., a town with a Dairy Queen, two pharmacies, five churches, and one community theatre that is staging St. Joan, the story of Joan of Arc. After the owner of the town’s major industry, a cheese factory, dies during a storm, the play’s lead actress, Ruth Hoch, becomes convinced that the death is not simply an accident and begins a life-changing quest to discover the truth.

Jessica Pinaire ’18 of Flagstaff, Ariz., dazzles in the starring role of Ruth, a bookkeeper at the cheese factory who can’t resist short ribs and black raspberry cobbler.

“I’m more natural on stage than off most times,” said Pinaire, who started in theatre in high school. “The characters are incredibly relatable and deep. You will laugh. You will cry. You can’t help but fall in love with them.”

The minimal set allows the personalities of each character to shine through and allows audience members to focus on the dialogue without distraction, said Theatre Arts Professor and Department Chair Jay Oney, also the play’s director.

Erin Barnett ’16, a theatre arts major from Marietta, Ga., served a dual role in Book of Days, as the play’s lonely and afflicted Lou Ann Bates and as a costume shop assistant with Rachel Gifford ’18.

“This show in particular has so many different parts, from costume changes and props to over 100 light and sound cues, that all have to be seamless in order for the show to be cohesive,” Barnett said. “I was impressed that we were able to come to this point in less than a month, given all the different moving parts.”

“We always stretch our students. We wanted a play with heft that students could learn from, that would get freshmen involved as soon as they came to campus,” said Oney, who worked backstage on a Lanford Wilson play in 1981. “Wilson’s voice needs to stay alive on the American stage.”