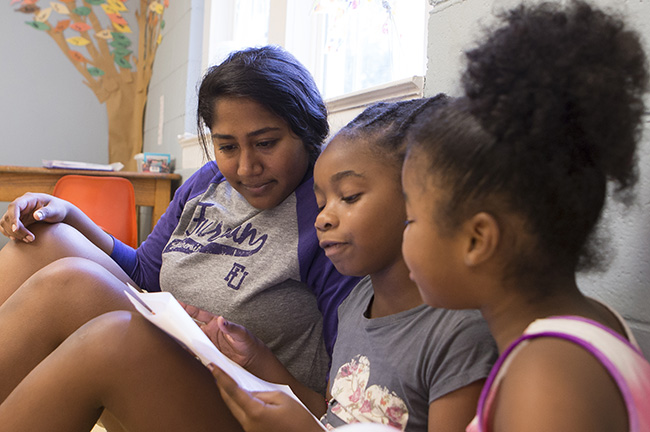 Two years into a pre-med track, Joseph selected an internship that had more to do with her minor, poverty studies. After an unsuccessful attempt to locate an internship combining biology and poverty studies, Joseph snapped up an internship with the Frazee Dream Center whose mission is “To train children to work hard, respect authority, love everyone and forgive quickly.” With her sights set on med school following graduation in 2016, Joseph says, “I know I’ll be involved in the sciences for the rest of my life, so working with Frazee was a way for me to branch out and experience something different.”

During the academic year, the Frazee Center serves as a preschool, and an afterschool program for at-risk kids from elementary and middle schools. More often than not, the children come from homes where finances and stability are tenuous at best. For primary and secondary school-age children, Frazee and its volunteers provide homework help through mentoring, meals, and if needed, basic necessities like clothing. In summer, the center runs Camp Frazee, an eight-week program brimming with indoor and outdoor activities, exercise, academic enrichment, and two meals daily.

“I’m avidly interested in alleviating poverty,” says Joseph in an online journal she kept throughout her Camp Frazee experience. The daughter of India-born parents, Joseph says whatever line of work she chooses, she wants to contribute in some way to loosening the grip of poverty.

She talks about the faces of poverty—the familiar images of hungry children in faraway places like India and Africa; then the more local face of the under-performing child whose single mother is frustrated with her low-wage job. “For now, I think it’s important for me to realize and make a difference in the struggles unfolding close to home,” she says.

Joseph first learned about Frazee through volunteering as a mentor during the school year. Now in her third year of afterschool mentoring, Joseph says, “I love it when kids you don’t know just come up and give you a hug and smile, and the connection you can make with your mentee. It’s all very infectious, and I wanted more than an hour a week.”

And more is what she received—six plus hours a day, five days a week, for eight weeks. Officially, her role as teaching assistant consisted of helping Frazee staff in developing and implementing fun, engaging activities and exercises in math and reading with the intent to build character and academic success. Unofficially, Joseph was likely stretched mentally, emotionally, and physically just as much as her Frazee campers.

While the experience taxed her emotions and patience at times, she focused on the larger picture and root causes of poverty. “I strongly believe working with our youth is the key to preventing poverty. Good education, commendable behavior, and a strong work ethic . . .  when these values are embraced at a young age, the effects will live on for a lifetime,” says Joseph.

Along with the smiles and hugs, Joseph also faced her share of heartache. In the two-month internship, she remembers two young siblings who came to the program disheveled, dirty, sunburnt, and who apparently dressed themselves, wearing wintertime clothes in the thick of summer. She later learned the mother was unemployed, and there was no running water or electricity in their home. “The thought of [kids] having to live a life they don’t deserve will always be etched in my mind,” says Joseph.

The children’s stint at Frazee turned out to be a short one. The mother was arrested, and the brother and sister fell into the hands of the Department of Social Services.

Joseph recalls another child who, during a math game, started to fall apart emotionally, saying, ‘I want my dad’ repeatedly. Removing her from the game, Joseph attempted to understand the source of the girl’s distress. “She told me she was frustrated her team wasn’t winning the game, but then she continued to cry for her dad. I told her she was a great contributor to her team, that her team needs her.” Probing further, Joseph learned that the girl’s father would be going to jail that day. “My heart broke into a thousand pieces,” she says.

Getting at the heart of behavior issues is a skill Joseph found herself using frequently, and a skill fostered by Frazee staff. Joseph says, “I know there are reasons behind every attitude and action a child chooses, so it’s important to listen when a child talks and not be afraid to ask questions, because at the end of the day you’re there to make sure they’re okay and to provide support.”

Encouraging her girls to respect authority, and doling out discipline were areas Joseph wrestled with most at camp. “To my girls, I’m just an intern, not their teacher or parent.” More than a few times, Joseph had to deal with disruption, meanness, refusal to do activities and the like. And while she had to endure the blowback of taking away the girls’ privileges, she remained stalwart. “I’m a bit of a softy, so I’m trying to change into someone who stands firm and confident in their decisions, while still remaining loving and forgiving,” Joseph writes in her journal.

Those hard days at Frazee made the little victories there all the sweeter. Joseph fondly remembers a physically disabled and developmentally delayed youngster who was having trouble with reading. Joseph encouraged her to break down words into pieces and sound them out.  While casually observing girls during reading time, Joseph was delighted to overhear Jasmine (we’ll call her) sounding out her words. It was a practice Jasmine continued for the remainder of the summer. Says Joseph, “That made me pretty proud, because I know she was trying, and sometimes trying is all it takes to become better . . . places like Frazee implement gradual changes so that one day there can be lasting victories.”

To create an environment for success, Joseph starts with herself.  “I have to make sure I give 150 percent.” Watchful of virtually everything she does, her charge will notice if Joseph isn’t on her A game, whether it be how she sits in circle time, doing Pilates and other activities, or her level of tolerance. “I want to inspire these kids to always work hard and try their best at everything so they can become overcomers instead of underachievers.”

She understands that engendering values like a strong work ethic and a will to persevere may not be ideals espoused at home for many. “I want to make sure the kids themselves understand the power of education and the significance it will have in achieving their dreams . . . and that they are capable of most everything.”

Joseph will start rounds this fall at Greenville Hospital System under the guidance of Susan Ybarra, Furman Pre-Health Experience Coordinator. You can bet Joseph will be trawling for rounds related to pediatrics—and she will surely bring skills collected at Frazee.

For the lessons learned at Frazee, Joseph is grateful. “I’m very much indebted to the staff for being excellent examples . . . I’m also indebted to my kids because even though there were days they challenged me, they filled my summer with so much joy and love. I am blessed and humbled by this summer internship.”

When asked how she thinks the experience will help her down the road, Joseph says, “[Working at Frazee] instills so many skills—hard work, patience, communication skills, empathy, service mentality—I hope these are things employers are looking for.”

Joseph may be onto something. Add to the list compassion, dispute resolution, respect for others, and ability to encourage, teach, and motivate. What organization wouldn’t jump at the chance to employ someone with that skillset? Some might consider her a natural leader. Others might even call her a hero.

Learn more about Internships at Furman.