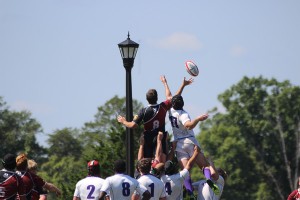 Jacob Milchuck scored three trys to lead the Paladins past the College of Charleston 56-5 Saturday at Roberts Field.

The Furman defense pressured the Cougars throughout the day as C of C seldom advanced deep into Furman territory. The Cougars scored on the final play of the game after an errant pass bounced into the hands of a C of C winger with only green field a head.

“Our set pieces (lineouts and scrums) looked much better this weekend and Jacob did a great job of directing traffic,” said Furman Coach John Roberts. “I am pleased that we did not become complacent and lapse into poor play.”

Furman is 4-0 on the season and 2-0 in league play. The team travels to Charleston this weekend to take on the Citadel, a longtime rival. The Bulldogs are 1-0, having defeated Lander Saturday 12-42.

Kick-off for the contest, to be held on the Main Parade Ground, is set for 1:30 p.m.