They come from 36 states and 20 foreign countries.  There are the usual number of valedictorians, student body presidents and homecoming queens, but there is also a belly dance teacher, a kite maker, a private pilot, and a Rubik’s Cube whiz.

The freshman class of 762 students includes 27 student body or class presidents, 12 valedictorians, and 254 who served as captain of an athletic team. They had an average high school GPA of 4.49 and an average SAT score of 1281.

The freshman class also includes 255 members of the National Honor Society, 182 two-sport athletes, 21 Eagle Scouts and Girl Scout Gold Award winners, and 77 students who have lived outside the country.  Twenty-six percent of the students come from South Carolina, while 67 percent are from out of state and another seven percent are international students.  African American students make up 5.4 percent of the class.

Student yield, the percentage of accepted students who enrolled, was 24 percent, the highest that figure has been since 2008. 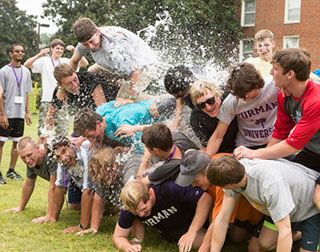 “The ‘It Takes a Campus’ philosophy had a significant impact on our yield,” said Brad Pochard, Furman’s associate vice president for admission. “The entire Furman community—faculty, staff, alumni, current students and especially our Ambassadors—was instrumental in our success. They participated in recruitment events, attended off-campus receptions and made hundreds of individual contacts with admitted students. Making that connection is so important. Thirty-seven percent of admitted students who interacted with a faculty member enrolled this year compared to just 15 percent who had no faculty contact.”

Founded in 1826, Furman enrolls 2,730 undergraduates and is the top-ranked liberal arts college in South Carolina according to U.S. News and World Report.