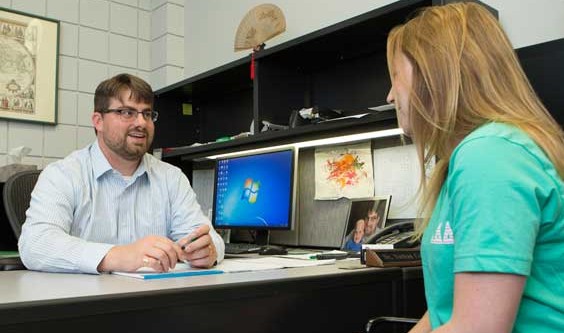 Nathan Cook was one of two Furman University faculty members to be awarded the Alester G. Furman Jr. and Janie Earle Furman Award for Meritorious Teaching during the May 2014 Commencement exercises.

The Furmans endowed the annual award in 1969. It is granted annually to one or more Furman faculty members in recognition of teaching excellence.

Selection is based on a consistent record of teaching excellence, an extensive knowledge and passion for the academic subject, demonstration of a concern for student learning and a cultivation of a love of learning. A committee of faculty members and students makes the selection of the recipients.

Cook, who joined the Furman Faculty In fall 2008, will be named an associate professor of economics, effective Aug. 1, said John D. Hollingsworth, Jr., Professor and Chair of the economics department Ken Peterson, Ph.D.

After receiving his doctorate at Michigan State University, Cook taught for two years at Denison University in Ohio, his alma mater. It was as an undergraduate at Denison that he first discovered his passion for economics because of meaningful student-teacher relationships he formed there. Cook applied for a position at Furman because, “I was looking to replicate an experience like I had” as an undergraduate. On the job market, he found that many colleges “talked the talk” about valuing teaching and the student-teacher relationship, but few actually “walked the walk.”

Furman, he said, is “one of the rare places that does both. It turns out that really is pretty rare.”

Cook “was very surprised” to be named a recipient of the award. “I’m incredibly honored by it.” Many professors, he said, come to Furman because teaching is valued and rewarded here. To be recognized among such talented and devoted colleagues makes the award even more of an honor. Two of his colleagues in the department, Peterson and Kailash Khandke, Ph.D., are past recipients of the Meritorious Teaching Award and “both have been invaluable mentors for me,” Cook said.