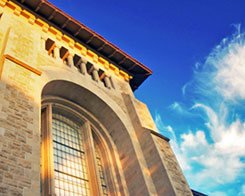 In the fall of his senior year of high school, Ben Riddle was accepted to Furman, a school located in his hometown and where his parents attended.  Then in March of 2012, he was accepted to Stanford University. What to do? An on-campus visit to Stanford only made the decision tougher for Riddle, who loves tech, design and networking with people who want to change the world. But in the end he stayed in South Carolina and attended Furman.  Now a junior, Riddle has worked with Professor Ross McClain, chair of the art department, to create the University Innovation Fellows program at Furman.  Riddle was recently profiled in FastCompany.