Carl Kohrt ’65, who served as Interim President in 2013-14, has provided a smooth transition for incoming President Elizabeth Davis.

Although by now she has visited the campus many times, this week is the official beginning of Elizabeth Davis’s tenure as Furman University’s president. She is the twelfth leader in the school’s history.

Since the announcement of her appointment in February, Dr. Davis has kept current with developments at Furman through regular conversations with Interim President Carl Kohrt ’65, the Board of Trustees, and the President’s Cabinet. This week she began her work in the Alester G. Furman Administration Building by convening several administrative meetings, speaking with a number of media outlets, and preparing for the return of students and the beginning of the academic year next month.

The older of two children, Davis grew up in New Orleans where she attended an all-girls public high school. Her father was a practicing dentist and a professor at the Louisiana State University School of Dentistry; her mother was a homemaker.

When it came time to select a college, Davis gravitated toward Baylor University, a Baptist-affiliated institution located in Waco, Texas, that she had learned of through family friends at church. 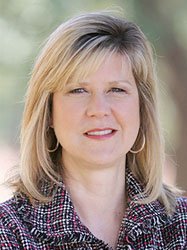 Davis quickly developed a reputation for being focused, transparent, collaborative, and productive, and moved up the ranks. After serving as Acting Chair of the Department of Accounting and Business Law (2000-01), she joined the administration in 2003 as Associate Dean for Undergraduate Business Programs. Davis served as Vice Provost for Financial and Academic Administration (2004-08) and was promoted to Interim Provost in 2008.

“Baylor shaped me,” she said. “Faculty are at the top of their profession but are driven and motivated to bring their students into their discipline. It’s a place where community matters, where the life of the campus matters and where people care about each other. That’s the kind of place that draws me. When I was encouraged to apply for the Furman presidency, I took a look at the website and liked what I saw. I continue to like what I see.”

Just a few months into his presidency in 2010, Baylor President Ken Starr removed the word “interim” from Davis’s title and elevated her to Executive Vice President. The promotion made her the top administrator for a 935-member faculty. She was also responsible for directing 11 schools and colleges.

“Elizabeth was a superb academic leader and had earned the trust of the faculty,” says Starr. “I had heard that she was decisive, knew how to say ‘no’ and was very thoughtful. She has been blessed with great analytical powers and is highly intelligent. It was a prudent to resist the practice of embarking on a national search.”

At Baylor, Davis played a key role in helping to develop Pro Futuris: A Strategic Vision for Baylor University. The document, which will guide the university for the next decade, calls for Baylor to grow in five aspirational areas: transformational education, compelling scholarship, informed engagement, committed constituents, and judicious stewardship.

Throughout the fall, Davis will be traveling and meeting alumni and supporters in Atlanta, Birmingham, Charlotte, Chicago, Columbia, Charleston and Washington, D.C.