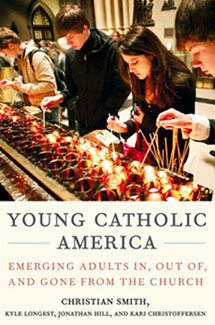 According to Furman sociology professor Kyle Longest, the Catholic identity is in crisis among emerging American adults. Long is part of a team of sociologists that took an in-depth look at young adults who consider themselves Catholic, and the result was a new book published by Oxford University press, Young Catholic America: Emerging Adults in, Out of and Gone From the Church.  The Spartanburg Herald-Journal published a story about the new book and what the researchers discovered. Longest joined the Furman faculty in 2009. His research centers on understanding how teens make the transition out of high school, focusing on substance use, religion and academic behaviors. He completed his undergraduate degree in history and sociology at Indiana University and earned his Ph.D. in sociology from the University of North Carolina – Chapel Hill.