These new trustees will join the Furman board July 1, 2014: 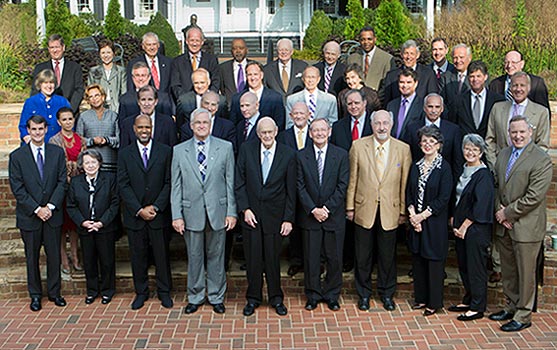 John Donald Anderson—Anderson, 1966 Furman graduate, is president and owner of Pinnacle Institute of Cosmetology, an accredited cosmetology school located in Charlotte, N.C.  Prior to Pinnacle, he retired as president and owner of Columbia Beauty Supply.  He was a member of Tau Kappa Epsilon at Furman, and earned a degree in Economics and Business Administration.  He has also served as a member of Furman’s Advisory Council.

Christopher R. Borch—Borch is president and founder of Micro-Mechanics, a company that designs, manufacturers and markets precision parts for high technology industries. He was a member of the track and cross country teams at Furman, and graduated with a degree in Economics and Business Administration. A former member of Furman’s Advisory Council and 2007 recipient of the Alumni Service Award, he and his wife, Andrea, established the Blue Shoes Scholarship Program to fund scholarships for the men’s and women’s cross country/track and field programs. He also serves on the Board of Directors for the USA Track and Field Foundation.

Sean P. Hartness—Hartness is Chief Operating Officer of Hartness International, one of the world’s most innovative and best known packaging companies.  He is very active in the Greenville community, serving on the board of the Peace Center for the Performing Arts and the Community Foundation of Grenville, Inc.  He has served on the Furman Advisory Council and has been a member of the President’s Club, Trustees Circle and Founders Circle.  He is a 1992 graduate of the University of South Carolina.

Susan T. Shi—Shi, a 1971 Furman graduate, spent 16 years (1994-2010) serving as Furman’s First Lady in partnership with President David Shi. An active civic and community volunteer, especially in the area of education, she chaired the board of Greenville’s Alliance for Quality Education, and served on the boards of the Community Foundation, United Way and the “Success by 6” program for pre-school children.  She also chaired the board of the Institute for Child Success from its inception until 2014.  She received an honorary Doctor of Humanities degree from Furman in 2010.

William R. Timmons, III—Timmons is the Senior Vice President of Investments for Canal Insurance Company in Greenville.  He is also president of Timber-Lands LP and Lullwater Syndicate, Inc., both privately held real estate companies.  He has served on the boards of the United Way of Greenville County and the Peace Center for the Performing Arts.  He is a 1974 graduate of Vanderbilt University and earned a master’s degree at the University of Chicago.

Baxter M. Wynn—Wynn is Minister of Pastoral Care and Community Relations at First Baptist Greenville of Greenville.  He has served in leadership positions on numerous local boards, including United Way of Greenville, Alliance for Quality Education, Community Foundation, and Greenville Forward. He received the Urban League’s Humanitarian Award in recognition of his role in the community-wide effort to adopt a Martin Luther King, Jr. holiday in Greenville County.  A graduate of Wofford College, he earned his Doctor of Ministry degree from Eastern Baptist Theological Seminary in Philadelphia.