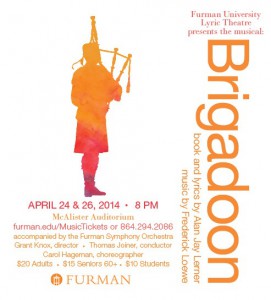 The Furman University Music Department will present Lerner and Loewe’s “Brigadoon” Thursday, April 24, and Saturday, April 26 at 8 p.m. in McAlister Auditorium on campus.

Directed by Furman Professor of Voice Dr. Grant Knox, the performance is open to the public and is part of the university’s Cultural Life Program. Tickets are $20 for adults, $15 for seniors, and $10 for students.

Lerner and Loewe’s “Brigadoon” opened on Broadway in 1947 and tells the story of two New Yorkers, the dreamer Tommy Albright and the world-weary Jeff, who stumble onto the enchanted village of Brigadoon while hiking in Scotland. Under the spell of a “miracle” designed to keep the village forever pure, the town materializes for one day each century. On this day, Tommy finds true love. Familiar tunes such as “Almost Like Being in Love,” “Come to Me, Bend to Me,” and “The Heather on the Hill” are featured in this timeless classic.

The cast of “Brigadoon” includes:

For more information about the production, call the Furman Music Office at 864-294-2086, or email the Music Department at furmanmusic@furman.edu.

Knox joined the Furman music faculty in 2013 as Professor of Voice and Director of Lyric Theatre. An American tenor, Knox enjoys a varied career in opera, musical theater, concert and recital. He has appeared with the Cincinnati Opera, Atlanta Opera, Chicago Opera Theater, and Chautauqua Opera, among others. Equally versed in concert repertoire, Knox has performed with the Atlanta Symphony Orchestra, Illinois Philharmonic, Binghamton Philharmonic and others, and has appeared in recital at the Kennedy Center for the Performing Arts.

Knox can be heard on the complete cast recordings of Gilbert and Sullivan’s “The Grand Duke” and “The Sorcerer,” Offenbach’s “The Brigands,” Romberg’s “Maytime,” and Kalman’s “The Carnival Fairy,” all released on the Albany Records label. Knox holds degrees from the Eastman School of Music and a doctorate from Northwestern University’s Bienen School of Music.