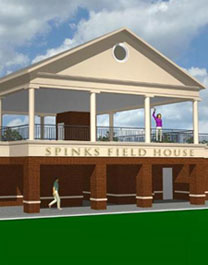 The $1.6 million, 5,300-square foot Spinks Field House will contain locker rooms for the men’s and women’s teams, public restrooms, concession stand and second story viewing deck.  It will be located between the west end of Stone Stadium and Latham Baseball Stadium.

The field house project has been in development for more than three years and is part of the recently-completed, $406 million “Because Furman Matters” capital fundraising campaign.  All funds to support the construction of the Spinks Field House came from donor gifts.