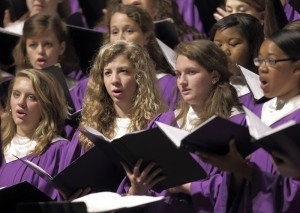 The Furman University Singers will cap off their spring tour with a concert on Tuesday, March 18 at 8 p.m. in McAlister Auditorium on the Furman campus.

The performance by the 80-voice ensemble is part of Furman’s Sound Quality Concert Series. Tickets are $12 for adults, $10 for seniors and $5 for students. The event is also part of Furman’s Cultural Life Program.

Conducted by Dr. Hugh Ferguson Floyd, Music Professor and Director of the Furman Singers, the ensemble continues a tradition of performance that is more than 65 years old. The Singers will present both sacred and secular music ranging from an early English Anthem of the Tudor period, to a new student work composed for the Singers and premiered on tour. The program includes new arrangements of familiar hymns and spirituals.

Floyd is Professor of Music at Furman, Coordinator of Choral Ensembles and Director of the renowned Furman Singers. He is the first recipient of the Bingham L. Vick, Jr. and Judith S. Vick Professorship of Music, established by the Furman Singers Alumni Association. Prior to his appointment at Furman, Floyd served as the director of choral studies at the Oberlin Conservatory of Music at Oberlin College. He also served as director of choral activities and voice instructor at the famed Interlochen Center for the Arts, and a guest lecturer at the Eastman School of Music, and Yale University. Floyd frequently serves as a guest conductor and clinician around the country. This season he will serve as guest conductor for the Portland Symphony Orchestra in Maine. In 2010, he was named artistic director for the New York State Summer School of the Arts, School of Choral Studies. Floyd is a graduate of Furman University, the Eastman School of Music, and the University of Michigan.

Tompkins, Professor of Music and University Organist, has been a member of the Music Department faculty since 1986. He also serves as organist of First Baptist Church in Greenville. Tompkins received his doctorate in organ performance from the Eastman School of Music and was awarded Eastman’s Performer’s Certificate in recognition of outstanding performing accomplishment. He holds the bachelor of music in organ performance from Eastman and the master of music from the University of Michigan. Tompkins is an active recitalist and clinician who performs each year at major universities and churches throughout the United States. He has presented recitals at the Kennedy Center in Washington, D.C., the Piccolo Spoleto Music Festival in Charleston, S.C., and at national and regional conventions of the American Guild of Organists, the Music Teachers National Association, and the College Music Society. He was a featured artist at AGO regional conventions in Nashville (1995), Fort Wayne (2001), and Charleston, S.C. (2003). Tompkins’s performances have been broadcast nationally on American Public Media’s “Pipedreams,” and his debut CD, Solemnity and Joy, was released in 2001 on the Pro Organo label.