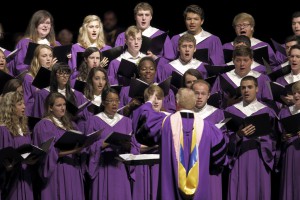 The Furman University Singers will be on tour Sunday, March 9 through Tuesday, March 18 performing at local and regional churches, with a closing concert in Furman’s McAlister Auditorium. The six stops on tour are:

The concerts are conducted by Dr. Hugh Ferguson Floyd, Music Professor and Director of the Furman Singers.

The 80-voice ensemble continues a tradition of performance that is more than 65 years old. The Singers will present both sacred and secular music ranging from an early English Anthem of the Tudor period, to a new student work composed for the Singers and premiered on this tour. The program includes new arrangements of familiar hymns and spirituals.