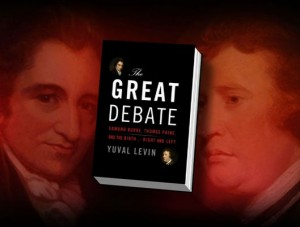 Dr. Levin’s talk, “Like the Leaves of Sybil: Burke and Tocqueville on Tradition in the Democratic Age,” is free and open to the public. His lecture is the first of the four-part Tocqueville series, “Tocqueville and the American Republic.” All lectures in the series are part of Furman’s Cultural Life Program.

Levin’s essays and articles have appeared in numerous publications including the New York Times, the Washington Post, and the Wall Street Journal. He is a contributing editor for National Review and author of several books including Imagining the Future: Science and American Democracy, and, most recently, The Great Debate: Edmund Burke, Thomas Paine, and the Birth of Left and Right. Levin is also the founding editor of National Affairs magazine and a senior editor of EPPC’s journal The New Atlantis.

Before joining EPPC, he served on the White House domestic policy staff under President George W. Bush. His work focused on health care as well as bioethics and culture-of-life issues. Previously he served as executive director of the President’s Council on Bioethics, and as a congressional staffer. Levin holds a bachelor’s from American University and a doctorate from the University of Chicago.