Six years ago, Furman University didn’t have a facility to support the first-rate research experience that it wanted to provide its students.

Thanks to the “Because Furman Matters” capital campaign, that’s no longer a concern. 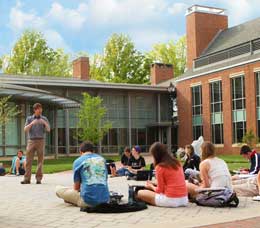 Named after a Furman graduate and Nobel Prize winner, the Charles H. Townes Science Center is equipped with research laboratories, computer labs and multimedia classrooms. The 200,000-square foot facility, completed in 2008, houses dozens of unique research labs and a planetarium. For students interested in pursuing laboratory research, the complex has been transformative.

“Students seem to have a sense of pride in the building.” Furman physics professor Bill Baker, Ph.D., says. “We find them spending much more time here than in the old building.”

The Townes Science Center is one of the major achievements of the largest fundraising drive in Furman’s history. With contributions from 27,250 members of Furman’s community, the “Because Furman Matters” campaign raised $406 million to fund a number of major initiatives at the university. When the public phase of the campaign was launched in 2007, the university’s goal was to raise $400 million.

Through the campaign, Furman aimed to establish scholarships and academic programs, enhance the student life experience, renew excellence in athletics, and expand efforts in the Greenville community. The majority of the campaign’s contributions were designated to the university’s endowment in support of scholarships, programs and professorships.

Interim President Carl Kohrt, a 1965 alumnus who served as Chair of the Board of Trustees when the campaign was launched, said the campaign’s success has already made a significant impact on current and future students.

“The sustained investment in Furman’s long-term success represented by this campaign has immeasurably strengthened academic life and the student experience at Furman,” Dr. Kohrt says. “It ensures that the University remains a vital educational and economic resource in Greenville and the Upstate.

“We are humbled by the generosity of the many individuals and organizations that have recognized Furman’s value to the nation’s higher education community, and have made this extraordinary success possible.”

The campaign supported dramatic improvements to a number of facilities that will benefit current and future generations of Furman students. 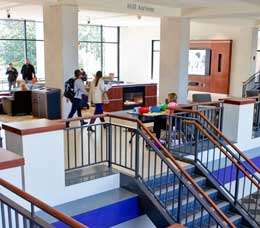 “Students are always socializing and it’s become the cool place to be,” says Scott Derrick, director of the Trone Student Center.

The campaign also raised $1 million to support need-based scholarships for the university’s study away program which helps students experience new cultures and societies. Another scholarship fund, Furman United, helped students continue their education. The unique program provides financial support to students who have been impacted by an unexpected financial hardship. The program has supported 165 students, and has received funding to benefit future students.

“It would be hard to find a more compelling testimony to the value of a Furman education than the investment so many donors, including current students, made to support this critical scholarship fund,” says Mike Gatchell, Furman’s vice president for development. “Though not planned from the outset, this effort was symbolic of the overall spirit of the entire campaign.”

Riley McCallus ’14 is one of the students who benefitted from the new fund.

Two years ago, the Pawleys Island, S.C. native wasn’t sure if she’d complete her education at Furman. A family member who was financially supporting her suffered a relapse in their alcohol addiction and needed assistance. McCallus had no choice but to return home and withdraw from Furman.

Then, she received a phone call from a Furman administrator. She learned Furman United would cover her educational expenses.

“The Furman United program and everyone involved with it single-handedly brought me back to Furman,” McCallus says. “[The program] placed me back in my original apartment with my closest friends, and ensured that I was enrolled in the classes I was originally signed up for.”

For McCallus, the campaign has altered her career path. By returning to Furman, she had an opportunity to work with psychology professor Onarae Rice and conduct research in a field close to her heart. She is studying addiction in mice.

“I’m now set to graduate from one of the best schools in the country,” McCallus says. “I will never be able to say ‘thank you’ enough.”

Tagged Study Away and International Education