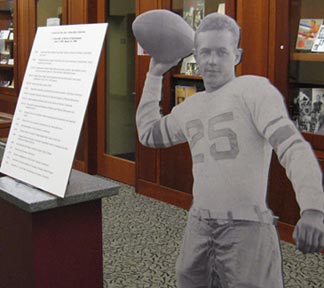 The son of Spartanburg sharecroppers, J. Lyles Alley is a man whose life and legacy are intertwined with Furman athletics.  “A Coach for Life: the J. Lyles Alley Collection,” a new exhibit on display at the James B. Duke Library through June 27, 2014, details Alley’s many contributions to the university.

As a student in the 1930s, Alley was a four-year letterman in track, baseball, football and basketball, earning a total of 12 letters in addition to a Furman degree. Over a 33-year career at his alma mater, Alley oversaw 245 Furman athletic victories, coached talented athletes such as basketball’s Frank Selvy and Darrell Floyd and helped to forge a national reputation for Furman as well as the City of Greenville through his success as head basketball coach in the 1950s.

“It not only showcases his tangible successes as an athlete and coach but suggests the more intangible impact he had on his numerous student athletes — the dedication, discipline and sense of pride he helped to instill in them on and off the basketball court or football field,” said Maryjo Donzella, ’14, who worked with Special Collections and Archives to develop the exhibit.

The exhibition is open from 9 a.m.–5 p.m. Tuesdays through Fridays in the Furman Room on the second floor of the James B. Duke Library.  Interim President Carl Kohrt will offer opening remarks for the exhibit at 9:30 a.m. Nov. 9 in the library’s Pitts Room during Homecoming weekend, with a reception following until 1 p.m.