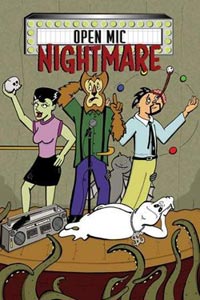 The Gloomy Roomies are an eclectic group of monsters living in the same apartment complex. They’re also the stars of a comic book called “Open Mic Nightmare,” written and illustrated by Furman graduate Bradd Parton. The author, who recently began a Kickstarter campaign to fund the printing of his comic creation, was the subject of an article in The Greenville News. Parton graduated from Furman in 1997 with a degree in music education.