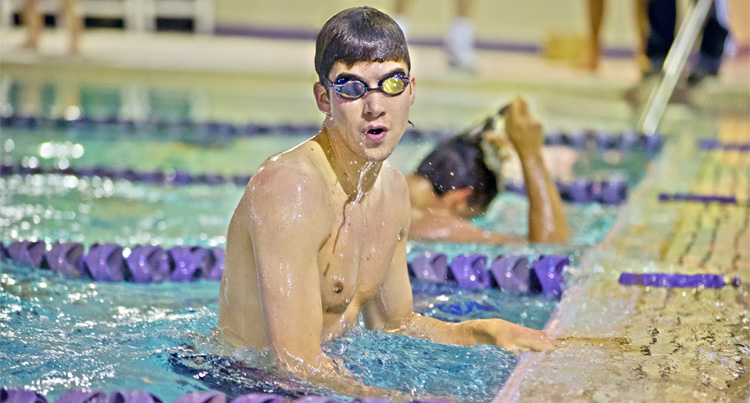 But these aren’t ordinary athletes. Instead of putting in long hours at the gym, you can usually find them working inside research laboratories across Furman’s campus. That’s because they’re chemistry students conducting summer research with Furman faculty members.

This summer, students and faculty members in the chemistry department temporarily turned their attention away from their experiments and toward the 36th annual Chemistry Ironman-Ironwoman competition. For nearly four decades, the event has tested the athletic skill of these scientists.

Today, the Chemistry Ironman-Ironwoman consists of seven athletic events: bowling, racquetball, table tennis, horseshoes, darts, 50-meter swim, 100-meter dash, and a long distance run. Some events, such as table tennis, are round robin tournaments. Others, like the 50-meter swim, are based on time.

When all of the events are complete, the points are tallied for each individual athlete much like Olympians are scored in the Decathlon. The man and woman with highest scores are named Ironman and Ironwoman.

The title is highly coveted, but a lot of the competition is about bringing the department closer together.

“The Ironman competition began as an attempt to further enhance the overall esprit de corps and sense of family within the summer research program by adding a social component,” said Kane-Maguire.

Over the years, events have been added and subtracted from the competition. For example, there’s been golf and field events like javelin, discus, and shotput. It all depends on what the students are interested in and what is feasible to do around their 9-to-5 research schedule.

“We had a surprise event one year where you put suggestions in a hat and did whatever came out,” Kane-Maguire said. “We even had a cerebral event, chess, but that took too long.”

Research projects have always helped chemistry professors connect with their students, but the Ironman competition encourages students and professors to get to know each other in a more casual setting.

“I don’t think there’s anything intimidating about the lab research,” said Kane-Maguire. “But this is a different setting, so you get to know the students in ways that are different from getting to know them in a lab situation.”

While the faculty are getting to know their students, they’re also challenging them. Both in the lab and on the field.

“The faculty seemed invincible academically, but they’re all athletic, too,” Banisaukas said. “Watching Noel and Lon play ping pong is a sight to behold. Until you see your professors in that setting, you don’t believe they can do it.”

Twenty years later, Knight is still a force to be reckoned with on the table. But the students are catching up. Last year, Knight made it to the finals and was barely beaten by the 2012 Ironman, Matt Correnti ‘13.

“The professors get really competitive,” said Dorismond. “It makes them seem more human.”

Because of that, the competition has succeed in contributing to the sense of family in the department. The coveted Ironman title has even been passed down from one generation to another.

That’s what happened to Julia Puckett’s family. Puckett ‘81 won the Ironwoman title in 1980, and her son, Daniel, shared the title with chemistry professor Paul Wagenknecht in 2009.

The Ironman competition isn’t the only social event that the chemistry department holds  in the summer. The department also hosts a volleyball tournament between individual labs. The event was added when Banisaukas was an undergraduate.

“We added it as a way to get the labs to gel,” he said. “Not all of the students compete in the Ironman events, but in volleyball, you can easily have fun with no skill.”

Thanks to the athletic events, the research students finish the summer with new friendships formed, a closer relationship with their professors, and some serious research credentials. And for a lucky few, there’s the honor of being named the department’s Ironman or Ironwoman.

The prize? A T-shirt with the Chemistry Ironman-Ironwoman logo on the front. At first glance it looks strikingly similar to a Superman shirt. But when you look closer you’ll see the Superman “S” has been replaced with the chemical symbol for iron.

After all, every good chemist knows the Man of Steel would be nothing without a little Fe.