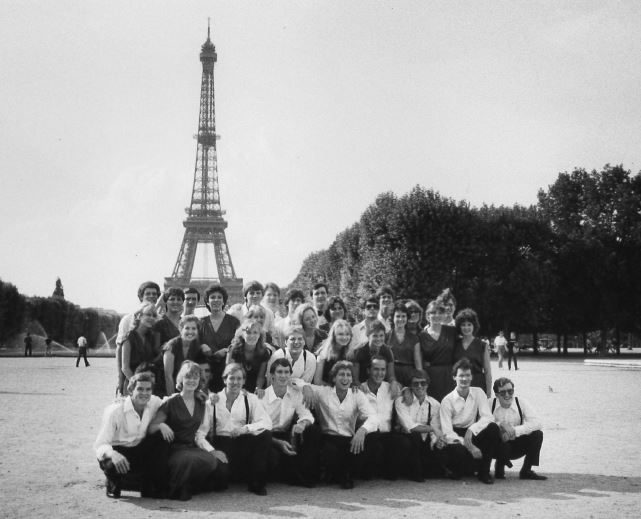 In the past 67 years the Furman Singers have seen many students pass through their ranks.  Throughout all these years, there are two songs that will always be in their repertoire: “Brown Eyes” and “The Battle Hymn of the Republic.”

“Furman Singers always end their concert with ‘The Battle Hymn of the Republic,’ and invite Singers alumni in the audience to join on stage in the singing. Throughout the country, and even on European tours, there is seldom a concert that does not have at least one alumnus who joins us,” said Bing Vick, immediate past Furman Singers conductor and retired professor.

When over 100 of Furman Singers alumni gather for their biennial reunion celebration this August, alumni can look forward to singing those songs again.  One of Furman’s oldest choral ensembles and considered to be among America’s best collegiate choirs, the Singers have represented the university’s ideals of vocal performance since their creation in 1946 by former conductor and professor, DuPre Rhame ‘24.

Now led by conductor Hugh Ferguson Floyd ’84 (Bingham L. Vick, Jr. and Judith S. Vick Professor of Music), the group continues to keep traditions from years past, including the biennial reunion celebration, which was started in 1979. Alumni returning for the August 2-4 event will enjoy musical direction from both Floyd and Vick, who retired in 2010.

The group will spend the reunion weekend practicing in the Nan Trammell Herring Music Pavilion, a space the Singers alumni helped raised funds to support – to the tune of $2.8 million. “The Herring Music Pavilion created not only ‘home’ for Furman Singers but also space for a state of the art music library and teaching facility. The construction project was conceived in 1996 by a group of Singers alumni to mark the 50th anniversary of the founding of Singers. It is unique among Furman facilities in that it was entirely funded and endowed by the alumni before construction even began,” Vick said. Gordon ‘65 and Sarah ‘66 Herring gave the lead gift for the project to honor Gordon’s mother, Nan Trammell Herring ‘29, who was involved in many choral groups at Furman and introduced “Brown Eyes” to campus before it was copyrighted by Rhame in 1935.

Over the years, many illustrious Singers alumni returned to join in the weekend reunion.  Carolyn Whatley Dennis ’47, who was the first president of Singers, regularly attends.  Metropolitan Opera stars, Betsy Bishop (Weiss) ’89 and Keith Jameson Richards ’90, frequented reunions several times over the years. “Despite the many achievements of numerous Singers alumni, (many college professors, successful business leaders, church leaders, even a college president and a Brigadier General), when these folks return to the campus and get together in rehearsal, they quickly return to their college selves,” Vick said. This year, David Ouzts ’85 is traveling from Memphis to accompany as organist and Robert Haigler ’74 will be pianist for the weekend.

The weekend of music and reminiscing will culminate with a worship-concert at First Baptist Church of Greenville on the morning of Sunday, Aug. 4. The Singers will study a variety of repertoire from the decades represented in attendance, including traditional choral tunes and something new they can learn in two rehearsals. “It is a love fest as much as it is a singing weekend – -the Singers are a real family,” Vick said.