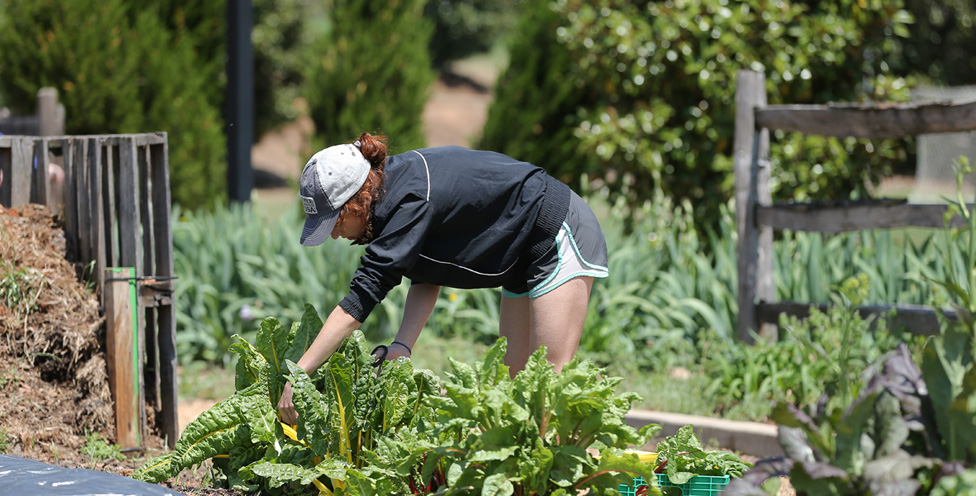 For a seasoned gardener, Furman University isn’t the obvious place to stop for vegetable and flower seedlings. But judging the spread available at Furman’s 2013 Earth Day Festival, it might become one.

That’s what Joy Owens is hoping for.

Every spring, Owens and members of the Furman in the Garden club grow and sell seeds that were produced in a 1/4-acre farm that is adjacent to Furman’s David E. Shi Center for Sustainability. The annual sell typically nets positive results. However, Owens is hoping the Earth Day Festival will bring more attention to what her club and others like it are doing at Furman.

“At Furman, we claim to be all about sustainability,” said Owens ‘14 (Hendersonville, N.C.). “This festival is a way to show it and back up the talk.”

Hosted by the Shi Center for Sustainability and Furman’s Greenbelt community, the Earth Day Festival featured a dozen student organizations that are part of Furman’s effort to infuse sustainability into its culture and identity. The university has celebrated Earth Day in the past, but the festival was the first time that Furman showcased its efforts to be green on such a large scale. Bell Tower Road, which runs between Furman Lake and the Greenbelt community, was shut down to transform the area into a carnival-like atmosphere.

The daylong event included educational booths along with live music and tours of the university’s collection of sustainable buildings. Twelve  green organizations in the Greenville community took part in the festival, encouraging people to recycle and lead a more healthy and sustainable lifestyle.

One of the main attractions was Furman Farm, which hosted a petting zoo for the kids–and the kids at heart. In all, an estimated 700 people participated in the festival.

“We’re eager to partner with our community,” said Angela Halfacre, a political science professor at Furman and director of the Shi Center for Sustainability. “By having an event of this scale, we can celebrate accomplishments and create new networks. Everything we do will ideally benefit students in terms of connections for research and other opportunities.”

LiveWell Greenville, which is a collaboration of dozens of public and private organizations in Greenville, embraced that idea by playing an active role in the festival. By setting up a booth at the event, the organization connected with students and community members, and shared their vision for health living in Greenville.

“Today exemplifies what LiveWell is about and the types of relationships we need to survive,” said Matthew Manley, community planning coordinator at LiveWell Greenville.

By hosting the festival on Saturday, April 20, Furman ensured the event would be family friendly. The Environmental Community of Students hosted one of the festival’s kid-friendly booths, focusing on recycling education. At the group’s booth, guests were given pictures of different foods and waste and were asked to separate them into three categories: trash, recycle, or compost.

“The game is for everyone, but kids seem to be most interested in it,” said Jake Crouse ‘16 (Cheraw, S.C.) “That’s what we were hoping for. We want to educate kids early so they’ll be able do it later and push their parents to do it, too.”

When the kids weren’t playing educational games, they were getting their faces painted, exploring campus, and cuddling with animals in the petting zoo.

For community members, the day was a huge success.

“They love this stuff,” said Hannah Langmuir, a community member who attended the festival with her two daughters. “They’re all about Earth Day, and they love to be on campus.”

Leading the way to a sustainable state