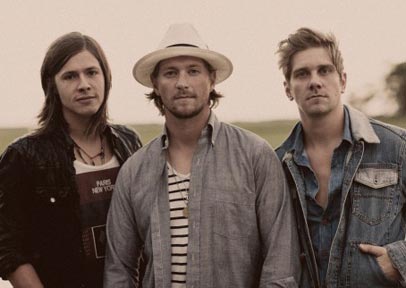 Furman faculty, staff and students can purchase two tickets for $20.  Those tickets must be purchased at the Timmons Box Office.

Needtobreathe was started on the Furman campus in the early 2000s by guitarist/vocalist Rinehart and fellow 2003 Furman graduate and drummer Joe Stillwell.  Other members of the band are Rinehart’s brother, Bo (backing vocals, guitar) and Seth Bolt (backing vocals, bass). Stillwell left the band in July 2012 after 13 years.

Bear Rinehart played wide receiver for the football team while attending Furman, and was named South Carolina Player of the Year in 2002.

Needtobreathe has released four studio albums: “Daylight” (2006), “The Heat” (2007), “The Outsiders” (2009) and “The Reckoning” (2011). The group has played the Bonnaroo Music and Arts Festival, opened dates for Taylor Swift and headlined its own successful tours. The band made its network debut in 2011 on NBC’s “Tonight Show with Jay Leno.”