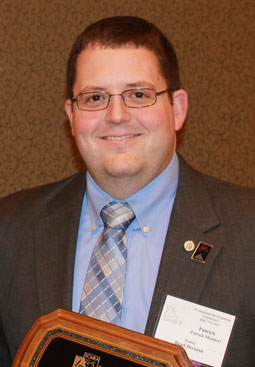 In a recommendation letter to the SCMEA, Chesnee Middle School band director Christopher Smith wrote, “Mr. Mainieri exhibits all of the characteristics of an outstanding young music educator. He excels both in the rehearsal hall and in his community, and his work helps drive band programs and our organization to new heights.”

Mainieri is in his seventh year of teaching in the School District of Pickens County. The Gettys Middle School band program currently serves 250 students participating in three concert bands, a festival band, a jazz band, a pep band and a leadership team.

Prior to his work at Gettys Middle School, Mainieri served as the Director of Bands and Ensembles at Easley High School, which currently serves 155 students. His ensembles at both Gettys and Easley have received numerous superior ratings and gold medal placements and have been selected for the South Carolina Band Directors Association’s Outstanding Performance Awards five times.

“It is an absolute honor to be selected, and I will forever be grateful,” Mainieri said.

Mainieri holds a bachelor’s in music education, and in 2012 he received a master’s from Furman in school leadership.