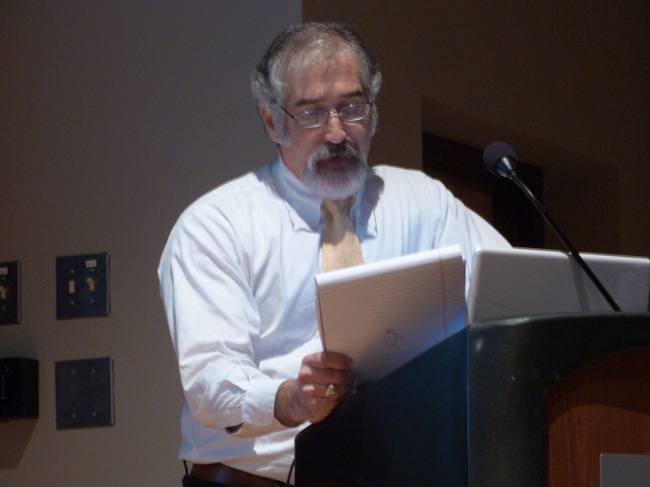 “Hi, My name is Kannon Haskins and I am an addict and an alcoholic. I am also a father. I am a teacher. And I am a Fuman alum.”

Kannon Haskins introduced himself to us as if we were a crowd who knew his struggle, familiar faces at an AA meeting, as if he had no problem sharing his personal story, despite how harrowing it was. Hayley Cunningham of PHOKUS, Furman’s peer education group on healthy living, introduced Dr. Haskins to a large student audience in Burgiss Theater, Wednesday, November 14.

Kannon Haskins has always been confident in his ability to achieve most things that he set out to do. He lists his accomplishments—graduating Furman, getting into medical school, building a successful private practice and clinics overseas, gaining prominence in his community—yet underneath these wins, he was losing a battle with addiction.

“Addiction is a disease that will tell you all the way to your last breath that you’re okay.”

Showing us pictures of himself as a young boy, Haskins tells us about the beginnings of his addiction, the day that he realized pain medicine made him “feel good,” and then with college came experimentation with alcohol.

“The first time I drank alcohol, I drank the whole bottle because it made me feel good. Alcohol became my reward [for studying hard],” he said.

As he progressed into adulthood, Haskins began abusing prescription drugs, and his attempts to give them up caused horrific withdrawal symptoms the likes of which none of us could imagine. His career and marriage suffered and his family was forced to barely scrape by financially, living paycheck to paycheck. Eventually it became more than he or his family could handle, and Haskins wound up in rehab, cut off from everyone he loved and fighting for the strength to triumph over his addiction.

“[I would ask myself] How did I get in this mess? How did this happen? How could I have gone from being a pillar in the community to this? I hadn’t had a DUI and I hadn’t had any legal issues . . .YET. And I like to use the word “YET” because it means, “You’re Eligible Too.”

Haskins stressed this point to his student audience—anyone who abuses a substance is “eligible” for the ruin that addiction brings.

Since Haskins left rehab, he has been alcohol and drug free for years. Now he travels around sharing his story of addiction and how he overcame it. At many points his story was hard to listen to, but it is one that students need to hear.

“I share this with you with the intent of putting all my defenses down, because I don’t have any secrets. And it should be okay to talk about this . . . Alcohol and drugs don’t bother me anymore,” said Haskins triumphantly concluding his urgent message.

Presented by Furman PHOKUS, the lecture was preceded by a pre-CLP “Mocktail” event where students participated in a variety of mini-games intended to educate them about the dangers of drug and alcohol abuse. Students were also tested on their knowledge and awareness of alcohol and drug related issues, and were informed about topics such as date rape drugs and clarifications of common student misconceptions of drinking.