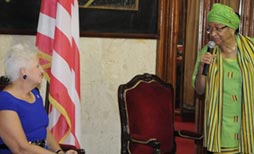 Furman alum Deborah Malac, a career member of the Senior Foreign Service who has served with the Department of State since 1981, is settling into her new position as U.S. Ambassador to Liberia.  She was nominated by President Obama on May 9 and her nomination was confirmed by the U.S. Senate on July 26. FrontPageAFrica reported on the newest U.S. Ambassador to Liberia and her hopes for the nation.