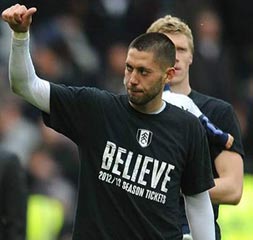 Former Furman soccer star Clint Dempsey hasn’t quite arrived in the Champions League, but the distance he’s traveled to arrive at Tottenham is impressive nonetheless. The 29-year-old is coming off a season where he scored 17 goals for Fulham in the English Premier League, to set records for the most goals scored by an American in the Premier League overall and in a single season. Goal.com reported on Dempsey’s stellar career since leaving Furman.