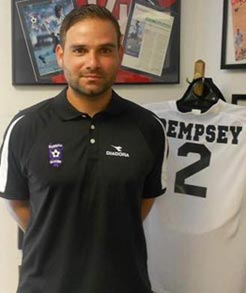 Anthony Esquivel is back at Furman as an assistant coach for the men’s soccer team after playing for the Paladins as a four-year standout from 1999 to 2002.  He played on strong Furman teams that included current U.S. national team standouts Clint Dempsey and Ricardo Clark, and he remains something of a celebrity for having starred in the iconic Disney soccer film, “The Big Green,” at the age of 13.  The Greenville News reported on Esquivel’s return to Furman a decade after his graduation.