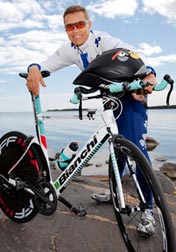 Tensions run high at meetings of the European Council, and the hotel bars around the European Quarter in Brussels are usually full of policy makers and diplomats unwinding after negotiations. But you won’t find Alexander Stubb there. He is likely to be training for a triathlon instead.

The Wall Street Journal published an article about Stubb, a 1993 Furman graduate who serves as Minister for European Affairs and Foreign Trade of Finland.

Stubb graduated from Furman with a degree in political science, and earned a Ph.D. on international politics from the London School of Economics.  He also has an M.A. in political science from the College of Europe, Bruges, and a diploma on French language and society from the Sorbonne University in Paris.

Tagged In the News, Politics and International Affairs