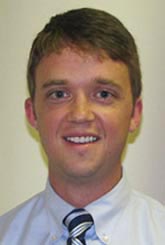 Eric Tornfelt, a 2003 Furman graduate who teaches civics and economics at Mallard Creek High in North Carolina, has been named Teacher of the Year for the Charlotte-Mecklenburg Schools.

Tornfelt received his B.A. degree in political science from Furman, and earned a master’s degree in teaching from UNC Charlotte.  He came to Mallard Creek when the school opened in 2007. A year later, he attended the Supreme Court Summer Institute and in 2011 was a speaker at the CMS 2011 Leadership Conference. He also has been involved in the Bill and Melinda Gates Foundation’s grant programs.

Read the article in the Charlotte Observer

Tagged Alumni, Education, In the News, Politics and International Affairs