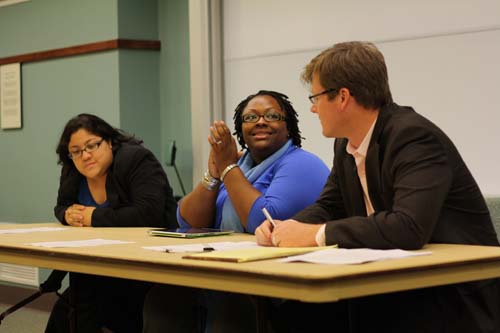 For the curious and determined, verbatim copies of the new S.C. immigration law are freely available online. However, its language is so difficult and unwieldy that Furman students seemed to appreciate the rundown of the law provided Thursday night by representatives of Legal Aid, a private nonprofit firm that handles civil legal matters for the poor.

The panel discussion regarding the law and its implications was sponsored by student groups Amnesty International and International Justice Mission. Panelists were Jada Charley, Kirby Mitchell and Susan Chang.

The  immigration law was signed in July by Gov. Nikki Haley and is scheduled to become active on January 1. Similar bills have already passed in Indiana, Utah and Arizona.

“One of the great strengths of our country is that our states can pass laws independently, at different times than one another,” said Mitchell. “We basically have 50 different laboratories to test the efficacy of various policies.”

Charley warned students that the law would have severe repercussions in the state. For example, Section 4 of the law states that it is a felony for someone to harbor or transport illegal immigrants if they know they are illegal. This may pose problems for shelters, churches, and aid organizations, she said. In addition, legal aid offices may be held liable if they assist illegal immigrants, even if those immigrants are there to ask for immigration paperwork.

Mitchell closed by placing illegal immigration in perspective with the other issues his firm deals with daily. “Realize that this state is very poor, and there are a huge number of people seeking help on a variety of issues. For example, we could be working 24 hours a day, seven days a week, solely on foreclosure cases. The government is spending a lot of time and money on illegal immigration, even though illegal immigration is far from the biggest problem in this state.”