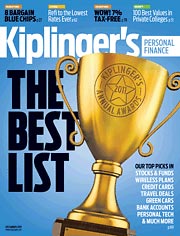 Kiplinger’s Personal Finance magazine has named Furman as one of the “Best Values in Private Universities and Liberal Arts Colleges” for 2011-2012.

According to Kiplinger’s, “the 2011-12 rankings for best values in private colleges and universities identify institutions that are both academically strong and affordable — our definition of value.”

The rankings are included in the December 2011 issue of the magazine.