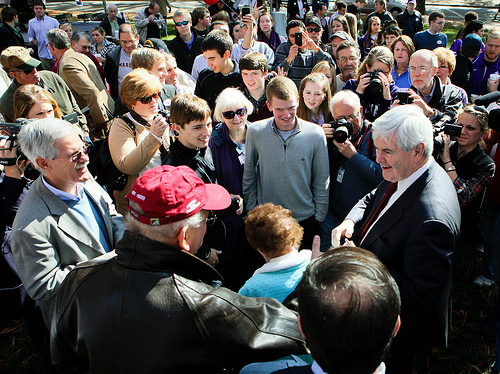 Mid-morning Saturday, while the gameday sounds of the Paladin Regiment marching band streamed through the air, former Speaker of the House Newt Gingrich was putting chalk to chalkboard in Plyler Hall to explain his ideas for the future of the United States to a class full of attentive Furman students.

The 10:30 AM address in many ways resembled a Saturday morning version of a Furman political science class for the small group of 25 to 30 students present. Some students took notes and most had questions for Gingrich by the 50-minute lecture’s end.

Gingrich presented his platform to the class in broad terms. Speaking on the economy, perhaps the biggest issue of this election cycle, the one-time college professor drew out a two-sided division he sees in the current economic debate on a green slate chalkboard.

The other key idea Gingrich drew out for students was his belief in American exceptionalism. Appealing to his freethinking collegiate audience, he contrasted this idea of his to what he speculated were the leanings of most of their professors.

Other speaking points made by Gingrich that seemed to give special consideration to his Furman audience, so much smaller than the national audience he would speak to in the televised GOP debate Saturday night. Gingrich made mention of his own made of his liberal arts credentials; a P.H.D. in European History. He also spoke of the bright future he projected students would find the Upstate job market with increasing application of an innovation model.

The success of Gingrich’s appeals to his Furman audience could be viewed at the lecture’s end, when the candidate and his staff filed on to the mall to the applause of a Newt Gingrich 2012 tent. Exiting students either sprung for a place in a crowd of supporters requesting pictures and autographs or looked politely on at what could potentially prove a historical moment; a candidate for United States president tailgating a game of Paladin football.