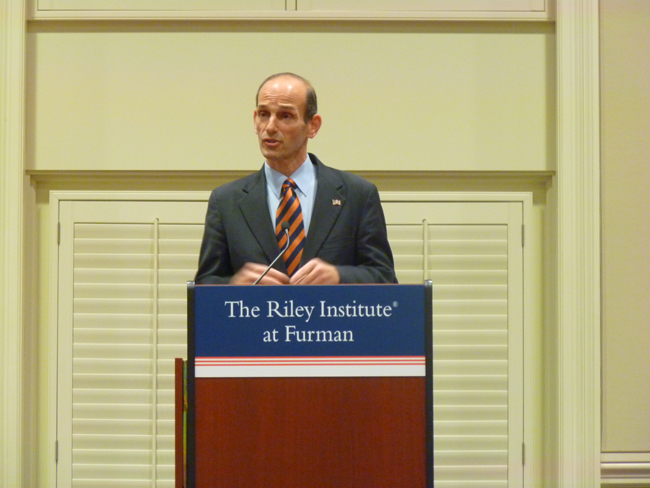 On Wednesday, former Governor of Maine John Baldacci spoke about dysfunction in Congress at an event hosted by the Riley Institute in the Younts Conference Center.  Baldacci was given a warm introduction by former Secretary of Education and South Carolina Governor Richard Riley, for whom the Riley Institute is named.

Baldacci began his lecture with a few lighthearted jabs at his home state of Maine.

“In Maine we’re known for our lobsters, lighthouses and L.L. Bean, but probably not in that order.”

From the beginning Baldacci, a Democrat, stressed the importance of service in politics. Baldacci grew up working in his family’s Italian restaurant, and became a successful business owner as an adult.

Baldacci moved into politics and ran for the state senate feeling that it was time for him to give back to his community and serve its interests. Baldacci held the office for four terms.

He recounted how comfortable he became in the position, but remembered a conversation with his father that convinced him to run for higher office.

Baldacci stressed that while the current period of political polarization is painful, it is not unusual in American history. He pointed to the Civil War, civil rights movement and Vietnam as periods of extraordinary division, but noted that we were able to overcome.

This routine division, Baldacci claimed, stems from the very nature of our Constitution. He argued that the system of checks and balances outlined within the Constitution is designed to slow down the production of policy. The purpose of slow legislation is to protect the individual rights and prevent the minority from being oppressed by the majority.

Baldacci acknowledged that the United States is now in an extreme situation, but said he had hope that U.S. statesmen would be able to pull through the crisis. With a chuckle, Baldacci noted that in Congress the case is usually that there is “storm before the calm.”